A few weeks ago I had a call from a young farrier who had relocated from USA and was finding it difficult to get work in South Australia. I have a standard master file of replies for email queries from farriers considering relocating from overseas, ranging from locations, hoof care charges in different states, how to get started, who to contact, weather conditions, travel distances, petrol prices, schools, immigration rules, visas and so on, so I invited him to spend a morning with me. I work in an area which could use more good farriers and where hoof care on pleasure horses is always available – because of travel and health reasons I have given away my clientele several times over the past 20 years, but it builds up again as fast as ever.

During the four hours I was with the young farrier, I found out that he used side clipped steel shoes plus under-pads with sole pack material on most horses, in other cases he used plastic shoes and that he charged $200 per set and was not prepared to change his methods or reduce his price and that he had been living in Australia for three months and had not shod a horse. In those four hours he did not ask me one question; he was set in his ways and I guess he thought the work was magically going to appear at his doorstep.

That afternoon, working by myself again, I saw a lovely big 16 hand chestnut gelding standing ready to be reshod; he had a very kind eye and a good disposition but was standing splayed out in front and cow hocked behind.

The front shoes were of the break-over enhanced design with squared toes and savagely belted in side clips, the nail placement was one directly each side of the clips and a gap to a third one behind that. The hind shoes were squared toed and side clipped with an outside trailer at the heel, a guaranteed design to make sure the horse cannot stand straight.

I engaged the well-presented young farrier in a pleasant conversation about shoeing. I asked why he preferred to use the squared toe side clipped shoe with the rolled toe. He explained that the horse was a good show jumper and the shorter toe shoe lessened the impact; I then asked if he was at all concerned that these side clips might restrict expansion across the front half of the hoof, and he explained (while we both looked at the shiny wear on the hoof side of the shoe he had just removed), that the hoof had only been expanding at the heels, and that there was no evidence of the hoof expanding across the front half. I asked him if he thought the side clips may have stopped this expansion, his answer was ‘they help keep the shoe in place’.

All of his answers sounded feasible, but all were unsustainable with regard to the long term health and soundness of the horse. Even when I pointed to the two bulges in the coronary band directly above the two side clips, he regarded these bulges as being normal; through experience I have learned that these bulges simply disappear when we don’t use side clipped shoes. So he then prepped the fronts for reshoeing which looked quite nice until those side clips were buried back into the walls to allow the shoe to be set way back behind the toe, which was then bull-nosed off to the rolled toe shoe; this also set the shoe wide at the heels and hanging out the back forming a leverage point.

Then he moved on to the hinds with the toes pointing out, or cow-hocked, and the shoes with square toes and side clips plus an outside heel extension, or trailer as it is sometimes known. According to the young farrier, the reason for the side clips was to prevent the shoe from moving when the jumping studs were used and the squared toe was to assist the breakover, while the lateral trailer, or outside heel extension, helps the horse to stand wider behind. “But they also cause him to toe out” I said. “Most horses stand cow hocked, so it must be OK,” he replied. I have shod eventers and jumpers all my life and have never had the need to use anything but a single toe clip on a concave shoe even with jumping studs fitted to keep a shoe in place.

The reality is that Mother Nature evolved the hoof to be in a balanced or symmetrical shape to assist the horses flight response; hence the fore feet are round (to carry the heavier weight of the front end) and the hinds are narrower along the sides (to assist the horse in turning sideways to escape its predators) and with a narrow toe to assist the horse to accelerate away from those predators.

It seems that the modern hoof care provider believes that the horses hoof is so defective that it needs to be interpreted in a very different way than ever before, however the simple basic principles of nature’s hoof balance have never changed; we just need to see what we are looking at.

My last call of that day was to an owner who had serious lameness issues with her horse. I was quite stunned when I viewed the horse, which was shod with the most amazing shoes I have ever seen. (Pic 1) All the horse needed was to have the soles dressed out correctly so the horse could stand on the hoof wall and after this was done the horse was fine and had no lameness issues. Instead the farrier had made these crazy shoes and insisted that the owner clean out the dirt build-up four times daily. That night I rang the farrier concerned and asked why he had shod the horse with those shoes. The answer was ‘for support’ so I asked ‘to support what?’ His answer was ‘If you don’t know then I’m not going to tell you’ which unfortunately is a typical answer from farriers who don’t have any scientific basis for what they are doing. He had no idea where P3 was in relation to his bar shoes and no understanding of how the hoof expands and contracts and no understanding that he was actually causing pain for the horse.

So that was a wasted day, but then tomorrow is another day. 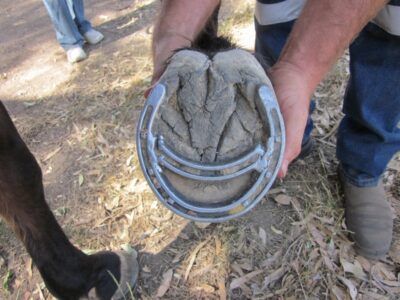