One of the sessions at Equitana 2005 in Melbourne in November was an open discussion on ‘To Shoe or Not to Shoe’. Panelists were Carl O’Dwyer, Grant Moon, David Farmilo, Will Miller, Dan Guerrera and Mark Rodney.

The discussion was well attended considering it was the last segment on the final day, starting at 5.15pm. The audience had the opportunity to question the panel and it would probably still be going if Equitana hadn’t closed its doors!

In summary, horse owners obviously have an ever increasing problem with farrier related problems. I made the comment that horse owners have a duty of care to their horse when it comes to hoof care, and I was very promptly put in my place with the audience demanding to know just how they can get their farriers to listen to what they want.

One member of the audience labelled farriers as ‘precious’ due to their reluctance and affront at having the owner daring to make suggestions. Owners who intervene are being told to ‘shoe it yourself’ or ‘get someone else then if you don’t like the way I do it’.  This attitude was not confined to one state or even to Australia judging by the comments! Owners who have tried to trim or shoe and who find it too difficult to ‘do it themselves’ are then out on a limb. Country people dare not challenge their farrier as he is often the only one available.

I do believe that this attitude is what is causing the major problems in our farrier industry today. Nowadays most people are answerable in their jobs, and horse owners have the right to discuss with and demand from their farrier what result they expect from him and from the horse. The reluctance of many farriers to involve the owner and discuss with them what they are doing, and also to be prepared to listen and learn has led to alternative and controversial methods of hoof care creeping into the system.

Also creeping in are new fangled horse shoes that bypass the simple basic principles of horseshoeing and create long term problems for the horse. This should be a huge wake up call to the whole farrier industry world wide to sit up, take notice, listen, learn and to be aware that horse owners are intelligent people who outlay a lot of money on their horses and who have the right to expect the best knowledge and care available. Nowadays with the internet on hand, immediate information is available to horse owners world wide, and farriers who do not keep up with this information and who object to being questioned by the horse owner have no-one to blame but themselves.

I began teaching my ABC Hoof Care Courses for horse owners six years ago because of the same old complaints from horse owners that their farrier would not listen. I have taught horse owners across Australia who are now doing a better job than many farriers. But I do humbly take the point that was made by a participant in the discussion that not all horse owners can do this. And this is where it has to go back to the farriers to swallow their pride and be accountable for their results just like the rest of us who live in the real world. 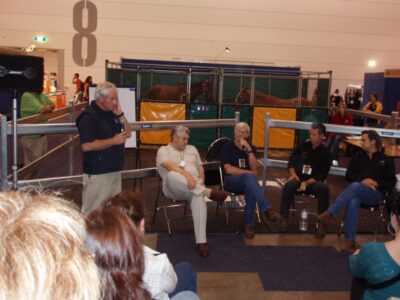