Teaching horseshoeing to ringers on a West Queensland station recently, my youngest pupil was Henry, a very determined three year old who was quite adamant that he was going to trim his own pony, and would I just please tell him how to do it. We had the same battle when it came to shoeing the pony, and for the sake of the pony, I won that battle, and Henry had to be content with nailing the trimmed offcuts to the fence posts. I put a tiny pair of aluminium racing plates on the front feet, which really impressed Henry no end.

A week later I had an email from Henry’s mum Prue, to say that Henry had won the local mini-camp draft against seven and eight year olds, and that it must have been my good shoeing. I don’t take credit for that at all; with that sort of determination everyone should watch out for Henry in another ten years.

Kids starting out this young need a bomb proof horse, as do kids of any age, to let them build up their confidence and skills. So what should we look for? Firstly we should look at their origins. 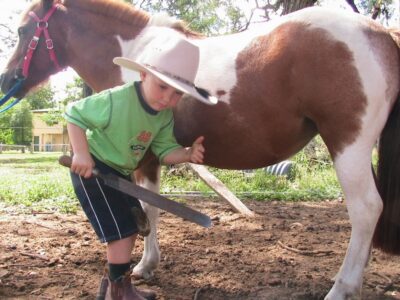 It is interesting to note that there are no indigenous Australian horses. Seven horses landed with the First Fleet at Sydney Cove in 1788. But what about ponies? Their origins vary from state to state.

In South Australia we are fortunate to have the Coffin Bay Pony, which I believe should be the true Pony Oz. Their ancestors were the 60 Timor ponies bought by Captain Hawson from the Rajah of Sumatra in 1839, to be used for breeding horses for the Eyre Peninsula. You will remember in The Man From Snowy River, where the stripling stranger made an epic ride on a part bred Timor pony.

After completing a teaching schedule around the length and breadth of Western Australia, I finished with a course at Cummins on the Eyre Peninsula in South Australia and was treated to a tour of the Coffin Bay Ponies new habitat (known as the Brumbies’ Run) by Milton Stevens, President of the Coffin Bay Pony Preservation Society. This really was a treat and should be added as a star attraction for horse-oriented tourists along with other SA treasures. I am an oyster addict, and SA oysters including Coffin Bay oysters should be on the list of national treasures.

The majority of the Brumbies’ Run is scattered limestone outcrops with sparse topsoil, difficult for an old fellow like me to even walk across in places, but these ponies run with gay abandon over the lot. When we got close enough, I could see their legs and hooves were in perfect condition, foals and adults alike.

The CBP Preservation Society now maintains a herd of one stallion, 20 mares and foals at foot. The herd has now bred down to a hardy, strong legged surefooted 12 – 14 hand sturdy pony, mainly brown in colour, with very hard hooves and a constitution able to utilise a wide variety of hard sparse feed plants.

The Coffin Bay yearlings are auctioned each year on Easter Saturday in the centre of beautiful Coffin Bay. During summer the yearlings are removed and removed to handling yards where the Society registers every pony, then runs them through a horse handling ‘school’ where they are well handled, brushed, taught to lead, have their feet picked up, taught to float-load, branded and generally prepared for auction.

(UPDATE: In 2010 a new stallion was introduced from the Oxley Heritage Brumby group, also the name is now Coffin Bay Brumby Preservation Society Limited as the offspring are higher than the 14 hands limit for ponies).

In general, what else do we need to look for when buying a pony? For the sake of your farrier, please look at its legs and its hooves. I get countless emails from people who have just bought a horse, pony or whatever, and firstly the picture accompanying the email shows the horse/pony in grass up to its knees (I don’t have X-ray vision) and secondly the horse/pony is now home and it has a boxy hoof, or a slightly clubby hoof, or it has foundered at some stage or it has conformation problems BUT it has such a lovely eye and it will be easy to correct it wont it? You all know the answer to that, which is ongoing high maintenance for life.

Do choose a pony with a good temperament, as long as it also has good straight legs which means it will have good hooves. As with any horse, don’t buy it sight unseen – the referral system in the horse world gives you a bit of an edge, as people generally wont recommend a pony with a bad temper or poor conformation, but the final choice really must be yours. Give your kids a great introduction into the world of horses on their first pony.