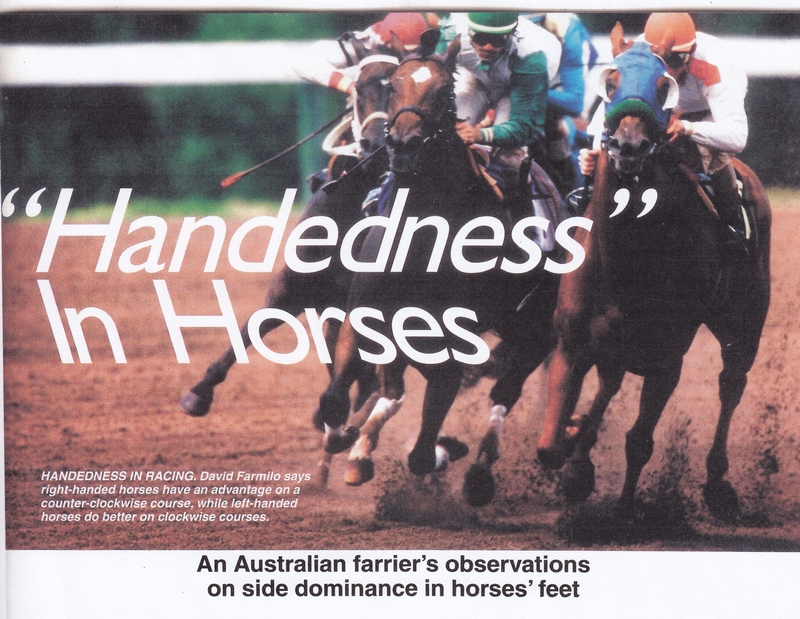 Horses don’t have hands of course but that doesn’t mean they don’t have a dominant side. And this left or right-handedness is an important concern for farriers, trainers and riders.

The reason for this is that from day one of the horse’s life, its brain dictates that it will use its naturally stronger foot, and so it develops bigger. Sometimes the difference is so small that the only way you can tell is to feel the width of the coronet band (ie the hairline at the top of the hoof) and then compare this with the opposite foot in the same manner. Your fingers will notice the difference.

In my opinion right- and left-handed horses are in equal proportions, and an ambidextrous horse (ie both feet exactly the same size) is around 1:1000 and is brilliant at anything you ask him to do.

From the farrier’s point of view it is important to be able to recognise right or left handed tendencies. Many years ago, working as a colt breaker and farrier, I noticed that most young horses seemed to be more tractable on one side than the other. Later on when the time came for their first shoeing, it was notable that the fronts were different sizes, and that the larger shoe corresponded with the more tractable side.

When I was fifteen years old, Old Joe, my mentor who was then eighty, always taught me to shape up the shoes in matching sized pairs in order to see right away if there was any difference in the horse’s hooves.

At that stage I never thought to ask why there was a difference and he never volunteered the information unless I asked the question. Many years later when I realised the value of the information, I made a point of observing the tendency of every horse and have spent the past thirty years studying this relationship of hoof size to natural athletic tendencies.

The first observation was born out of my own need for self preservation, and I noted that if the young horse bucked, it would always go to the side of its largest hoof. Quite a useful piece of information for any handler. This was also his most tractable side during the mouthing (bit training) process.

As a farrier, I began asking every client or horse owner what they used the horse for and how did it perform, then also noted any difference in hoof size. It soon became obvious that there was a predictable pattern of behaviour. A larger near-fore worked easier to the left while a larger off-fore worked easier to the right but where both fronts were of equal size, the horse was easy on both sides.

I was born left handed but over time have learned to be about 90% ambidextrous. In my shoeing techniques, I have tried to achieve as near as possible equal sized and shaped fronts on every horse, together with the owner’s cooperation in schooling the horse a little more on his weak side.

Sometimes there was an improvement for a period of time, and appearance wise they looked better with even sized hooves; but their natural tendency was still to favour the side of the natural strong hoof. Some horses become quite frustrated if we pressure them to work on their weak side.

To reinforce this left and right hand study, I practised recognising the different hoof size as they walked towards me for shoeing, and tested it by telling the owner in advance how the horse would favour or resist accordingly and the accuracy was amazing.

For the thoroughbred horse, racing anti-clockwise favours the right handed horse. Conversely, in other countries or in some states of Australia which race clockwise, this is to the advantage of the left handed horse.

On the polocrosse field it was beneficial for me to recognise the weak side of my opponent’s horse. It would obviously be of great benefit for riders of competitive horses to be able to identify these natural left and right handed traits. And similarly for rodeo horses coming out of a chute.

Many horse buyers purchase horses at auction, and look to a veterinarian for guidance on the horse’s health and soundness, while overlooking the fact that the horse may be totally unsuitable for the purpose for which they require it simply because of its natural athletic tendencies.

Working on a thoroughbred breeding, training and racing stud, I was able to observe that foals as early as twenty one days old were developing a difference in hoof size, and by the age of weaning, without the influence of any humans, were already noticeably left or right handed or ambidextrous.

As foals they were handled only briefly then allowed to grow up in the paddock, haltered every six weeks for hoof inspection, and by yearling preparation time they were definitely in the groove of their natural tendencies.

During the breaking in and the mouthing process, again the young horse wants to favour its natural born athletic movement, giving to one rein much easier than the other. My observation over this long period of time is that horses, like us, are born left or right handed, with only about one in a thousand born ambidextrous. So often I have heard horses criticised for not racing kindly clockwise or anti-clockwise when, in reality, they are running against their natural dominant tendency, and if they are given a chance to race the other way, their performance will improve.

Many clients and horse owners who are unaware of left and right handedness in horses are initially dubious that such a condition even exists. When shown how to recognise this, they have found their horses much easier to work with and understand.

Over the years I have taught many students to recognise this natural born trait in horses, as well as how farriers, by using consistent standards of shoeing, can help the horse and rider maintain a higher level of natural ability.

I receive a lot of queries relating to this. One query concerned a horse that when lunged to the off-side at a trot he was stepping short. He didn’t appear to have any soreness in the shoulder of legs and there was no injury to his hoof. He didn’t dip his head when trotting. The horse was obviously a very left-handed youngster. I suggested giving him plenty of room when lunging to his off-side, letting him start off in bigger circles until his confidence built up, then gradually over days or weeks asking him to try smaller circles. He will learn to become more flexible to the off-side as he gets stronger, but may always be predominantly left-handed.